Home - News - Why should you buy shingled cell solar panels?

Why should you buy shingled cell solar panels? 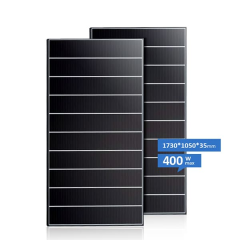 To keep up with the evolving needs of people, technology must constantly innovate. In recent years, leading solar battery manufacturers such as Anernmarketing have transformed the technology in their high-end shingled cell solar panels from traditional Full-cell to Half-cell.

New cell with outstanding advantages in terms of performance, performance, longevity…So what is the improvement in this battery compared to traditional panels that makes people so interested?

What is a Half-cell panel?

Half-cell is a technology created by using the traditional method of dividing a cell into two equal halves by a laser beam. The cells connect together to form a complete panel. This technique increases the efficiency of the panels. Moreover, it makes them more efficient than conventional Full-cell panels.

– The solar panel divides into 2 symmetrical halves and separated by a white line in the middle.

– Cell of the solar panel has a rectangular shape and has twice the number of conventional panels.

– When the photovoltaic cell comes in half, its current is also halved, resulting in reduced resistance losses and the panel being able to produce more power. According to the loss calculation formula: P= (I^2)*R when the current I is halved, the loss will be reduced by 4 times.

Optimizing the operation of solar panels when shaded

For shingled cell solar panels, due to being connected in series, usually, if a cell shades, the capacity of the whole panel will reduces. Therefore, to avoid this problem, manufacturers have divided the cells into 3 lines connected in series and used 3 diodes to separate the shaded cell arrays. Therefore, if a cell is shaded, the panel will reduce its capacity by 1/3.

But with Half-cell panels, the cells will be divided into 6 lines, if 1 cell shades, the capacity of the panel will only decrease by 1/6. So, under the same condition that the panels shade, the performance of shingled cell solar panels reduces compared to the Full-cell system.

– Experts have conducted an experiment that shows that smaller photovoltaic cells are less susceptible to mechanical loads, thereby reducing the possibility of cracking and breaking. 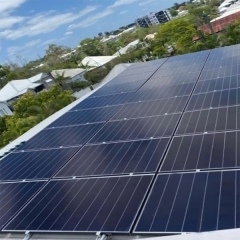 When a battery cell shades, the energy obtained from the light conversion of the unshaded cells in the same array will flow to the shaded cell and generate heat. If this phenomenon occurs for a long time, it will lead to the risk of battery damage.

For Half-cell batteries, the conduction distance is short, many bus bars, the current flowing in the bus bar reduces by half. It will be possible to minimize the heat generation due to this shaded battery cell.

Energy from the sun provides an abundant source of energy that is inexhaustible and does not produce carbon dioxide emissions. Therefore, the development of shingled cell solar panels technology industry is being interested by many scientists. So what is a solar battery? How does it work?

What are solar panels?

The structure of solar cells is made of monocrystalline and polycrystalline photovoltaic cells. They are highly efficient and have an average lifespan of up to 30 years.

The history of the development of solar cells:

The photoelectric effect was first discovered in 1839 by French physicist Alexandre Edmond Becquerel. However, it was not until 1883 that a new solar cell created, by Charles Fritts, who coated the selenium semiconductor circuit with an extremely thin layer of gold to form the junction.

The device is only 1% efficient, credited by Russell Ohl as the creator of the first solar cell in 1946. Sven Ason Berglund had a method that involved increasing the battery’s ability to perceive light.

A solar panel (solar panel/solar cell/photovoltaic cell) is a device that directly converts sunlight (photovoltaic) energy into electrical energy (electricity) based on the photovoltaic effect. The photoelectric effect is the ability of matter to emit electrons (electrons) when illuminated by light.