Home - News - What are the benefits of Half-cut Cell Solar panel?

What are the benefits of Half-cut Cell Solar panel?

A half-cut Cell Solar panel cannot function without a solar battery. So do you know what role solar cells play, how is their structure, how does it work? If not, the following article will help you get the answer you want. 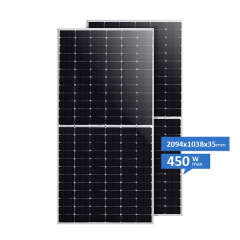 What is the concept of solar battery?

The current converted from the solar cell is direct current (DC), if you want to use it to operate electrical equipment in your home, factory, office, etc.. Similarly, you need to use an inverter to convert it to alternating current (AC).

Half-cut Cell Solar panel convert light into electricity based on the photoelectric effect in physics. The operation process of a solar battery is divided into 3 stages below:

And Stage 2: The electron-hole pairs in the semiconductor are divided and create the potential difference of the solar cell

Stage 3: The solar cell is connected to an external circuit to create an electric current

Consists of 6 main parts below:

Support frame: Has the function of shaping, protecting the safety of half-cut Cell Solar panel. The support frame comes of aluminum, so it has light weight, high rigidity, and withstands external impacts.

Glass: Toughened glass with thickness 2-4mm. Glass is responsible for protecting photovoltaic cells from external environmental influences such as rain, wind, humidity, etc. Moreover, thanks to the glass layer, solar cells will be more durable over time.

Photovoltaic cell: Generally, this is the part that absorbs and converts light into electricity. Currently, photovoltaic cells are made of two main types of crystals: monocrystalline (mono battery) and polycrystalline (poly). Photovoltaic cells need to meet the following requirements. Furthermore, the ability to absorb light well, collect electrons and generate electric current. 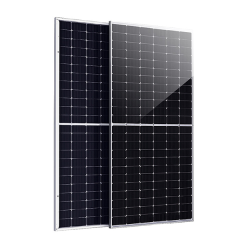 Back panel: The layer at the back of the half-cut Cell Solar panel also has the task of moisture resistance and electrical insulation. The backing plate is easy to make of polymers or different types of plastic. Backplates are usually white and are sold in sheets or rolls.

Circuit junction box:   The part responsible for bringing the connections of the battery module to the outside, the box containing the cables to connect the panels in a system together.

Solar cells are made of crystalline silicon. Currently, there are 3 types of solar cells most commonly common, including the following types:

Cut from tubular silicon ingots. Batteries made of monocrystalline silicon will have high purity, creating more room for electrons to move. The appearance of mono batteries is usually a uniform dark black. Batteries have the highest performance, durability and cost of all solar cells available today.

It comes from ingots of silicon that has been melted, cooled, and solidified. Due to the structure of polycrystalline silicon, the internal voids are not much. Moreover, the electric electrons are difficult to move, so the efficiency is lower than that of monocrystalline solar cells.

Poly batteries have a lower cost and durability than mono batteries. Batteries can only absorb sunlight when a certain level reaches. When encountering bad weather such as overcast, cloudy, rainy, etc., the battery may stop working until the sun returns. Mono batteries are usually recognizable by their dark blue exterior.

Basically, it comes from thin films of molten silicon. Similarly, the battery structure is polycrystalline, so the efficiency is lower than that of mono and poly batteries. Among the three types of solar cells, thin film batteries have the lowest performance, durability and cost.

Solar batteries are widely common in production and life such as:

Half-cut Cell Solar panel brings green and clean energy. Furthermore, this is a renewable energy source, contributing to the protection of natural resources, environmental protection, and reduction of the greenhouse effect.

Generally, solar cell efficiency always measures in percent. Efficiency is common to evaluate the quality of solar cells, the more efficient the battery, the higher the cost and vice versa. This is also the reason that mono solar cells are the most chosen of all batteries, the efficiency of mono batteries is high. Moreover, the power output is also more.

The efficiency of a solar cell depends on a number of factors such as:

Install the solar battery by following the steps below:

– Create a supporting frame for a battery of stainless steel or a steel frame on a concrete roof, a corrugated iron roof, a tile roof… How to make the frame sturdy, resistant to storms, good bearing.